The Imagen Awards will honor Lin-Manuel Miranda, Luis A. Miranda, Jr., Dr. Luz Towns-Miranda, and Luz Miranda-Crespo for their humanitarian and artistic contributions

BEVERLY HILLS (May 4, 2017) – The Imagen Foundation announced it will recognize the Miranda family including Lin-Manuel Miranda, Dr. Luz Towns-Miranda, Luis A. Miranda, Jr., and Luz Miranda-Crespo with the Imagen President’s Award at the 32nd Annual Imagen Awards to be held August 18, 2017, at the Beverly Wilshire in Beverly Hills.

The Imagen Foundation, which hosts the premier Latino entertainment awards program, is the leading organization advocating for the advancement, positive portrayal and creative excellence of Latinos and Latino cultures in television and film. Other notable figures that have received the Imagen President’s Award include Jenni Rivera and Mexican American Legal Defense and Educational Fund (MALDEF). 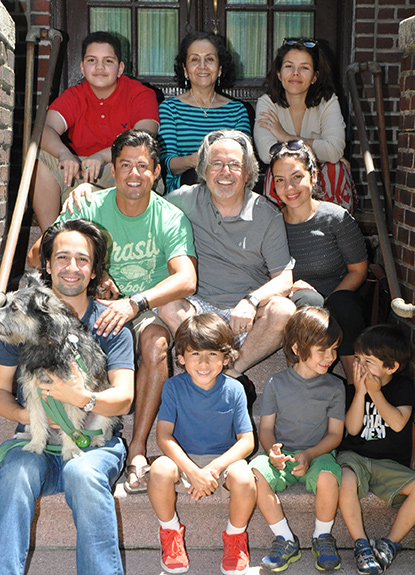 Lin-Manuel Miranda is a 2015 MacArthur Foundation Fellow as well as a Tony, Emmy, Grammy and Pulitzer Prize-winning composer, lyricist and actor. The creator and original star of the smash Broadway hits In The Heights and Hamilton, Lin-Manuel has been heavily influenced by his family throughout his life. He gets his ambition and drive from his parents. His father, Luis A. Miranda, Jr. was the youngest student ever accepted into New York University’s clinical psychology program, where he met Lin-Manuel’s mother, Dr. Luz Towns-Miranda.

Luis has made his impact working in government and non-profits. He served three New York City mayoral administrations and is the Founding President of the Hispanic Federation, as well as past chairman of the NYC Health and Hospitals Corporation. He is currently the Managing Partner of The MirRam Group, through which he continues to pursue his passion for politics, and serves on various non-profit boards.

Dr. Towns-Miranda has earned respect in her field of clinical psychology. From working with foster children, running a therapeutic nursery, serving on the NYS Board of Psychology as well as the national board of directors of Planned Parenthood Action Fund, in addition to numerous other organizations, Dr. Towns-Miranda continues to make a considerable impact on clinical psychology and in the community.

Together, they raised Lin-Manuel and his sister Luz Miranda-Crespo in a home focused on family and instilled in them the love, encouragement, sense of community and work ethic that led them to blossom.

That sense of family and community transcend the Miranda home to the workplace. Lin-Manuel’s sister, Luz, is the Chief Financial Officer of the family’s businesses. Meanwhile, Luis helped secure resources for the newly launched Hamilton Education Program with the non-profit Gilder Lehrman Institute of American History, which engages Title I schools in New York, Chicago, and many of the cities visited by the Hamilton Tour in a curriculum, creative arts project, and brings their 11th grade students to see Hamilton at special matinee performances throughout the year.

“The success of Hamilton, written and produced by a Latino, is an example of the success that is possible and the creative talent found within our community,” said Helen Hernandez, Imagen Foundation President and Founder. “But the Imagen Awards not only celebrate artistic excellence, it recognizes those who inspired that excellence, which in this case is the entire Miranda Family.”

The hit musical will come to Los Angeles from August 11 through December 30, 2017.

Event sponsors to-date includes Nielsen, Microsoft and The Coca-Cola Company. For more information regarding tickets to the Imagen Awards, please contact Yanira Leon at awards@imagen.org or (626) 376-9751.