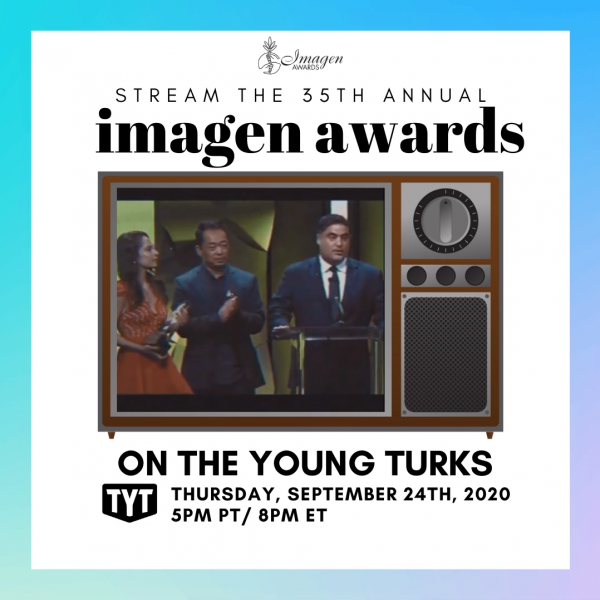 LOS ANGELES, Calif., September 2, 2020 — The Imagen Foundation today announced details of this year’s Imagen Awards ceremony, honoring accomplishments by Latinos in the entertainment industry. The 35th annual awards, which will be held virtually due to the COVID-19 pandemic, will be live-streamed in partnership with the popular progressive platform, The Young Turks (TYT.com). The event, this year themed “The Power of Our Voices,” will be streamed on Thursday, September 24th at 5:00pm PT on The Young Turks, which to-date has garnered close to five million subscribers with over 14 billion views as a network.

In light of the current climate of racial divisiveness across the nation, the two entities are joining forces in a one-two punch effort to both highlight positive contributions of Latinos as well as call attention to the continued lack of adequate Latino representation in Hollywood. According to the Pew Research Center, the U.S. Hispanic population reached a record 60.6 million in 2019. Yet, despite comprising 18% of the U.S. population, Latinos continue to be vastly underrepresented in the entertainment industry, both in front of and behind the camera.

Helen Hernandez, president and founder of The Imagen Foundation, said, “We are extremely proud to be partnering with The Young Turks for the 35th Annual Imagen Awards. They have proven to be powerful and effective leaders in assuring that issues of importance to all communities are addressed and are a wonderful platform for this momentous year. We are grateful for their trust, confidence and support.”

“The Young Turks was honored with the Vision Award back in 2016 by The Imagen Foundation and I’m excited to amplify this important awards ceremony by streaming it on our network,” added The Young Turks founder and host Cenk Uygur. “In my acceptance speech back in 2016, I described the win as ‘personal’ and warned about the potential impact of a Donald Trump presidency. We’re dealing with it now. In order to counter Trump’s fear-mongering and Fox News’ constant lies about people of color, we need to make sure there is visibility and positive recognition in the media. Shining a light on these achievements is a necessary antidote to the false narratives the Latino community combats day after day.”

This year’s Imagen (Spanish for “image”) Awards nominees were announced on August 5th from submissions received from throughout the entertainment industry. Both nominees and subsequent winners are determined by an independent panel of entertainment industry executives and Latino community leaders. For a complete list of nominees and more information regarding The Imagen Awards, including sponsorship opportunities, please visit www.imagen.org or call (626) 376-9751.

About The Young Turks

TYT is the largest online news and talk network for the connected generation. The award-winning TYT is one of the top multi-platform online content creators, generating over 250 million views a month. TYT is “America’s largest online progressive news show.”

Most recently, Cenk Uygur was recognized by Mediaite on their list of Most Influential in News Media 2019. Host Ana Kasparian was named to the 2016 Forbes 30 Under 30 Media List and The Daily Dot’s 20 Women of YouTube list. The Young Turks won the Audience Honor for Overall YouTube Presence in the 2018 Shorty Awards and the Webby People’s Voice Award for News and Politics – Series. In 2017, The Young Turks received best in News and Culture at the 7th Annual Streamy Awards, won the 21st Annual People’s Voice Webby Award for Online Film & Video – News & Politics series, and was also recognized with the Audience Honor at the 10th Annual Shorty Awards under Overall YouTube Presence. The Young Turks was awarded the Imagen Vision Award and the Vote It Loud Fifth Estate: Champion in Media Award for Best in New Media in 2016. In 2015, The Young Turks was named to Variety’s FameChangers List (No. 7) and The Hollywood Reporter’s Next Gen List (No. 1 in the News category).

TYT includes owned and operated and partner shows such as The Young Turks, The Damage Report, TYT Investigates, Happy Half Hour, and more.